Why Were Kellogg’s Corn Flakes Invented?

Which cereal is the most popular one? The cornflake’s name comes spontaneously in our minds. And among all cornflakes brands, the father is Kellogs cornflakes.  Many funny rumors surround the innovation story of the Kelloggs cornflakes.

Some of them are funny, some of them are unbelievable. But the online speculations are always linked with cornflake’s invasion stories. But many false claims are also associated with the Kelloggs cornflakes inventions. This food was the first time because it had an elementary digestive property. The traditional American breakfast meals are time taking to cook. And cornflakes are ready to eat food. You only need some milk and nuts. 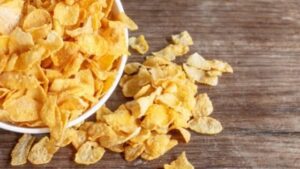 Who Invented The Kellogg’s Corn Flakes?

From the end of the 18th century, America was developing. And mass industrialization is slowly taking the place of traditional industries. This time the people no longer have time to sit down and spend hours to complete their breakfast.

This time in 1894, Dr. John Harvey Kellogg invented the cornflakes. The food inventions target was simple, and it was already ready to eat breakfast.

Dr. John Harvey Kellogg is an American nutritionist doctor. He was the director of Michigan-based Battle Creek sanitarium. It was one of the popular health resorts which were founded by the Adventist Church.

Kelloggs treated wealthy and poor people. So his case study number is pretty high. And this is the reason he created the cornflakes, which are full of nutritious value.

The internet rumors are not all correct. A fact-checking service like Snopes is claiming that most of the musturbation-related rumors are false. Snopes explains that when the corn flakes were invented, the American citizens mainly were suffering from digestive problems.

And as the traditional breakfast meals are loaded with protein and beef steaks. This was not enough. Many sweet items like pastry puddings are also present in the breakfast menus. All of these dishes are linked with the ill digestive issue and gastric problems. The cornflakes are full of nutritious value. These are easy digestive foods.

But the rumors were spreading because cornflakes’ tastes were blunt. Cornflakes were never advertised as the anti masturbatory breakfast meal. Hence the advertisement claims that cornflakes are an easy digestive complete breakfast meal.

What Is The Real Story Of Corn Flakes Invasions?

Dr. John Harvey Kellogg has invented cornflakes as an easy digestive meal. And the first time, it was served for the patients of the Michigan Sanitarium.

The anti-masturbation concept is like a myth. But it is true that Dr. John Harvey Kellogg designs the food as lower in protein and higher in nutritious value. But apart from it, there is no proof that cornflakes were invented to control people’s sex drive.

Most of the internet’s viral rumors are false. The Snopes explaining the corn flakes inventions are clearly linked with easy digestive system properties. These meals are never advertised as anti-masturbation meals or anything. The root of the mythical conceptions is nothing but blunt tastes.

There are many other food profits that have the properties which keep your hormone secretion balanced. Cornflakes are low in calories, but there is no such proof that Dr. Kellogg invented cornflakes in order to control masturbations. So it is clearly shown that Dr.Kellogg invented corn flakes as an easy digestive meal.

Now you know all about the cornflake’s invasions. Since the 18th century, corn flakes have become a permanent member of our breakfast table. And if there are any misconceptions linked with the cornflake’s invasions, you can easily overlook them because there is no such proof of such incidents in the past. Dr.Kellogg invented the corn flakes as an easy digestive meal, and the first time it was served among his sanatorium patients.

Summer Makeup Tips: How to Make your Makeup Sweat-Proof in Heat and Humidity?

Summer Makeup Tips: How to Make your Makeup Sweat-Proof in Heat and Humidity?