“Do” is an irregular verb with three irregular forms, namely, “do, did, and done.” It also has a present simple form “does.” “Do” is used most effectively in the form of a question. For example – “where do you live? Or what do you do?” It is more commonly used as a main, auxiliary, and substitute verb. 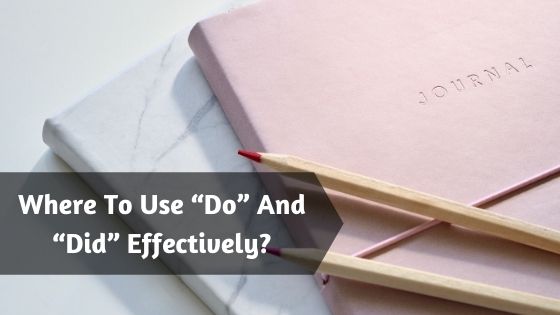 As a main verb, “do” is used to take part or perform an action. Some of the examples include:

Similarly, “do” is also used to deal, achieve, complete something. For example:

In addition to this, many times, “Do” is used jointly with nouns like work, job, homework, etc. For example:

Universities also use “do” to studying subjects. For example:

It also comes handy while using nouns like a copy, design, painting, drawing, and informal speech. For example:

“Do” is also an auxiliary verb aside from “be and have.” It is used to state negative messages with “not,” develop a question, and make a verb even more empathetic. For example:

He told everyone about his moving plans, but no one believed him. But when did do so, everyone seemed shockingly surprised.

I had to call the police when I politely asked everyone to leave the club, but they didn’t do so.

I do it almost all the time.

On the other hand, “did” is a past tense of “do.” Therefore, it is mostly used in sentences to enquire, replace, or state a past action. For example:

The other ideal use of “did” is to state an emphasis. For example:

As you might have noticed, “did” is often used in conversations to invoke questions. For example:

Therefore, “did” is used in all similar ways as “do,” but mostly in the past tense, state action, negativeness, and emphasis.

If you really want to know the actual difference, search for our best IELTS coaching in Gurgaon.