Tata Tigor Electric rolls out: Is it the beginning of EV revolution in India? 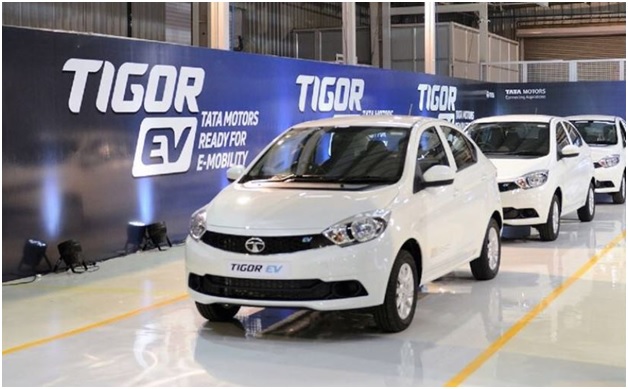 Tata Motors rolled out the electric variant of its stylish Tigor at the Sanand manufacturing unit in Gujarat on 7th December 2018. At the event, Tata Group’s Chairman N Chandrasekaran and Chairman Emeritus Ratan Tata flagged off the first batch, while Tata Motors CEO Guenter Butschek drove the first Tata Tigor EV. The first batch is only for the Energy Efficiency Services Limited (EESL).

Reportedly, the first batch of the electric car is part of the first 350 orders out of 10,000 units placed by EESL earlier this year. The manufacturer is expected to deliver a total unit of 250 cars in the first phase as it has already received the letter of agreement. For the rest 100 units, the agreement is under the process and will soon be issued by the EESL as stated by the company’s spokesperson.

The Tata Tigor Electric version seems to be similar to the regular model especially in terms of design. However, it comes with minor changes to bring about a certain difference from the standard Tigor. The electric car comes with EV badge in grille as well as at the rear. The prominent design of the car remains the same. The other styling elements and the basic silhouette are retained from the standard model. The electric version is expected to get the same layout inside the cabin and will pack most of the features offered on the ongoing model. As of now, no further details are known, however, it will be updated as soon as the details are revealed.

It was anticipated that the electric variant of Tata Tigor will share the same mechanics with Tata Tiago electric, another product from the automaker, but Tata Motors has planned for a smaller capacity motor for the Indian version. The Tata Tigor will come with a 29.8kW electric motor which is equivalent to a 39.95 bhp. The car will directly compete with the Mahindra eVerito electric which offers 30.5kW or 41 bhp power. You can get more details regarding the specifications at Autoportal.com.

The price for Tata Tigor Electric car is INR 10.16 lakh for the government’s tender excluding GST as quoted by the manufacturer, while the price including GST will be slightly more at INR 11.2 lakh. However, the prices are expected to come down once the car is available in the open markets. The company will also offer a warranty for a period of five years on the car which will be supplied to the Energy Efficiency Services Limited (EESL).

By the end of 2030, the Indian Government is planning to bring electric-powered cars in the market replacing all the vehicles with the traditional engines. As a result of this, some of the manufacturers are looking forward to introduce completely new electric-powered cars, while others are planning to introduce electric variants of their popular products in the market.

With the first phase of Tata Tigor Electric rolling out today, Tata Motors mark the beginning of EV revolution in India. At present, there are only two electric cars available in the Indian market: Mahindra e2o and Mahindra eVerito. Both the cars are quite expensive. The launch of the Tigor EV marks entry of new players which will result in increased competition, reduction in prices and more positive changes in the due course.

Here’s What You Should Know: The Long-Term Effect of Estate Planning

How Can Organizations Boost Up Their Customer Retention Rates?

How Can Organizations Boost Up Their Customer Retention Rates?