Butter Chicken is one of the favorites of all the meat and non-veg lovers in India and not only in India it is one of the most ordered Indian non-vegetarian recipes globally. The butter chicken is the main course dish and is made of a buttery gravy made from tomatoes, onion, ginger, garlic, and cashews. The marinated and then roasted chicken is added to that gravy and cooked until the flavors are incorporated and served with Indian bread like tandoori paratha or butter naan or garlic naan etc. The butter chicken first originated somewhat in the 1950s and three restaurateurs that belong from Punjab invented this delicious recipe and they introduced this recipe first in their globally renowned restaurant named Moti Mahal restaurant based in Delhi. Butter chicken is the most famous dish globally for 60 years and has been a favorite for people who love to eat Indian non-vegetarian food. In this article, we will discuss the history of butter chicken and how it got invented, and its ingredients and recipes. 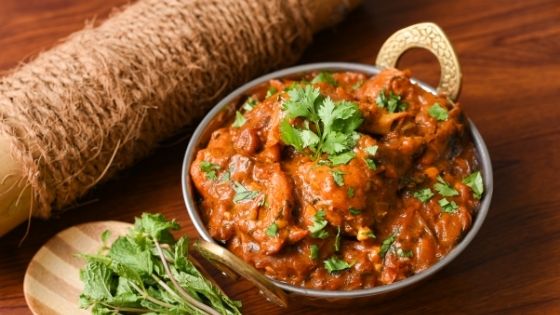 Butter chicken is a main course dish of the North Indian non-vegetarian menu, people prefer to order it online in the search of raw chicken online. To cook butter chicken the raw chicken is first marinated in various spices and yogurt and then cooked slowly in the traditional tandoor. After that these roasted chunks are added to the creamy buttery tomato sauce and cooked till the sauce releases some oil and is topped with fresh cream and Kasturi methi. There are many variations of butter chicken available on the internet with many different ingredients and techniques.

The History of Butter Chicken

Originally the Butter Chicken was invented in the Moti Mahal Restaurant based in New Delhi, India.  The tale of the invention of butter chicken is an interesting tale just like the dish and the story is also filled with many flavors. Earlier Moti mahal was founded before partition in Peshawar and it was founded by Mokha Singh Lamba and the founders of Moti Mahal, New Delhi was working as servers there and they were Kundan Lal Gujral and Kundan Lal Jaggi and the third partner Thakur Dass was taking care of his family wholesale business opposite the restaurant.

This restaurant in Peshawar discontinued just before the partition and these three refugees shifted to India after the partition and also brought their culture to India and butter chicken found its new lovers in New Delhi and they opened a new restaurant Moti Mahal and butter chicken became its signature dish. They got all the luck and original logo of the Moti mahal Peshawar by Mr. Lamba and soon this new restaurant became famous and became one of the best restaurants serving Butter Chicken. Initially, these three partners started with just selling tea, bread, and biscuits and then collected some money for tandoors and gradually expanded their business. mahal restaurant and

The butter chicken came into existence when a Bengali customer visited the Moti Mahal and he supervised the chef to make a gravy of tomatoes, butter, cream, cashews, and various spices which when blended together make a creamy textured and finally when roasted chicken is added directly to the gravy from tandoor and cooked for a while gives an amazing dish called Butter Chicken.

The chefs realized this gravy goes really well with tandoori and made tandoori chicken even more delicious and this dish within no time became popular that time and today it is one of the most enjoyed non-vegetarian dishes of Indian Cuisine and is popular worldwide.

Moti mahal made the butter chicken recipe quite famous globally whereas in Delhi most of the population was vegetarian, this Peshawari cuisine attracted their attention and people started to relish non-vegetarian foods as well. Moti Mahal was first opened in Daryaganj, Delhi and soon after the invention of butter chicken it became a renowned global brand and had branches across the globe and Moti Mahal is considered as one of the best and the top brand when it comes to Indian food. Especially butter chicken which is their signature dish and best food invention.

Story of the success of Butter Chicken

Butter chicken was invented in the 1950s and has had global dominance since then and butter chicken is available on the menu of every restaurant that serves Indian cuisine.

The internet is flooded with various recipes of butter chicken displayed by the most renowned chefs across the globe. It’s the most simple non-vegetarian dish and is created with some marinated and roasted chicken pieces with bones or without bones and cooked in the creamy and buttery tomato gravy with a few spices.

This is delicious and a mouth-watering dish and you can stay away from this dish for long. The butter chicken is so easy to cook that you can cook it at home too and no need to go to a restaurant to eat it.

These three entrepreneurs have created butter chicken and invented a dish that has a global presence and has made a lot of efforts to make this dish popular and there are very few chefs in India who have given such loved recipes to the world and achieved recognition.

The Steps of Relaunching your Brand on Social Media

What Are The Services And Benefits Of Hiring A Technology Consultant?

What Are The Services And Benefits Of Hiring A Technology Consultant?