Significant Factors that Influence the Cost of a Mobile Application Development

by Florence Alfano
in Technology
0
0
SHARES
0
VIEWS
Share on FacebookShare on Twitter
Are you interested in knowing the cost of developing the mobile app? According to the requirements, the total cost of mobile app development differs widely in various factors. In order to develop a mobile app, a good effort, proper plan execution, and the best network are the most needed one. Understanding mobile applications is also a mandatory one in each and every phase. 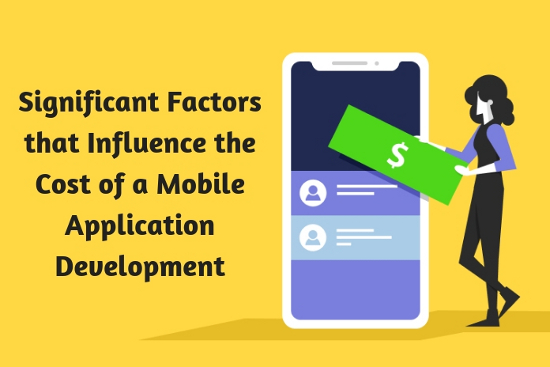 The app keeps on changing due to several reasons and also based on the market condition at a specific time. At the same time, it is also based on the nature of the app that needed to be developed. Generally, an average app development cost is about sixty-five thousand US dollars. There are many other factors too to predict the cost of the mobile app and they differ more and more starting initially from the product to product and market to market.

What about the current trend?

In this modern era, the digital domain is entirely surrendered by mobile bio-networks. In order to maintain the state of the economic factor on in the present competitive world, mobile apps are the most needed one. Starting from the simple reading app to that of the medical concern tracking app there is a list of apps to view your needs. The reality is that most of the organizations hesitate to develop the mobile app as they fear about the development cost.

What are the major factors to determine the cost of Mobile App Development?

2. Human Resource
Generally, the people who are working for the app’s development are considered to be the important ones especially for the determination of the cost of the app. Here, there are two types such as the in-house developers and offshore developers. Both ones are expensive to employ. Totally based on the budget, one can opt between either of the options. It is also important for the terms of economic and also for the successful completion of the app’s development phase.

3. Mobile Platform
The platform can be decided in well advance to run the app which is the most crucial one for finally fixing the cost of the app’s development. These platforms are available in the digital market such as the AndroidOS, iOS, and WindowsOS. The determination cost varies more especially for the different platforms. From the development view, the Android apps are more expensive one when compared to that of iOS.

4. Testing process
The testing process is given equal importance as the cost factor is decided here. The final testing process is a better one when compared to that of the first testing. Here, there is a great possibility to make necessary changes in the app totally based on the feedback. This one surely raises the budget too.

5. Updates and maintenance
The developers are the main targets to provide the best technology to the clients. The maintenance cost is about four thousand US dollars and it goes in hand along with the project’s magnitude. The maximum cost is about three thousand US dollars and the total cost depends on the app updates and the business requirements too. A recent report exclaims that about fifty percent of the mobile apps are updated at least twice the month and about forty-percent apps are updated for every six months.

Which is the app one: Native Apps or Hybrid Apps?

Choosing of either the native or hybrid app is totally based on the preference. The native apps can be directly downloaded from the app store and it is designed for the individual platform. On the other side of the flip, the hybrid apps are designed to perform the functionalities on multiple platforms and websites too. The native app is a faster one and the cost is at the peak level when compared to that of the hybrid app. Hence, the selection of an app type alters the total cost of the app development.

6. Time factor
The time factor is an important component which is used to determine the cost of the app. Typically developing an app is a time consuming one and it is a costlier too because if the major reason for the additional resources. Most of the app experts charge between thirty dollars and fifty dollars per hour of work.

7. Features and Functionality
This one is a determining factor of the app’s total development cost. There are more and more features when it comes to the point of integration of the enhanced features. According to the needs of the business or app, the expert can choose from it. The social media sites can be used such as the Facebook, Twitter and Instagram etc which are empowered with the Global Positioning System.

8. Licensing and Copyright
Generally, an app’s copyright is a vital one and it is important too subjected to the release of the app in the digital market. In order to launch an app, one must pay some amount to the concerned app store. There is a list of aspects to determine the cost of mobile app development. At the same time, it is difficult to accumulate a fixed amount. Determination of the licensing cost is influenced by the several features which are included in the app. Along with the innovative advancing technologies; the organizations are trying to speed up in a reliable manner.

4 Essential Things to Include in Your Company T-Shirt Design