How Yoga Is Spreading In The U.S.A

by Florence Alfano
in Health
0
0
SHARES
2
VIEWS
Share on FacebookShare on Twitter
It would not be wrong to say that the science of yoga has taken the entire globe by the storm, even the western civilization stretching as far as the U.S. The increasing popularity of yoga among the United States residents is evident in  many ways: in the increasing number of budding yoga studios on the streets, in the increasing number of people taking up yoga as a career, in the volume of yoga wear flooding at all category of stores, and even in the elevated conversations about yoga that you can overhear in the public places. And why would it not? It bestows the practitioners with numerous benefits such as: increased flexibility and strength, enhanced athletic performance, stress reduction, and is good for you. A survey conducted by Yoga Alliance and Yoga Journal shows a tremendous increase in the number of yoga practitioners and is set to quantify the spread of yoga across the U.S.A 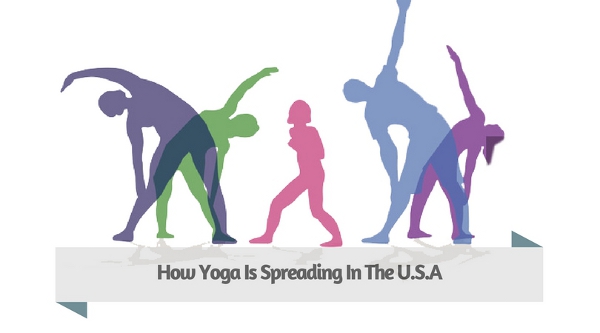 Here are some of the reasons that clearly indicate and express how yoga is spreading in the U.S.A:

1. Budding Practitioners: There has been a remarkable increase in the number of practitioners according to the study. If sources are to be believed, yoga has doubled up in few years in the U.S and currently 37 million practice this science of holistic wellness. The most impressive thing is that every one person out of ten is practicing the art of yoga. Additionally, there is a new finding stating that almost three quarters of people have been practicing yoga for nearly five years, which underlines that it is the massive surge of the yogic interests in the U.S. Also, around 34% of the people polled are expected to take up the practice in the next few months, presumably because they are aware of the benefits of yoga. Clearly, the awareness of yoga is getting around the country like wildfire.

2. Increasing Awareness of the Benefits of Yoga: It is pretty accurate to say that the science of yoga does numerous miracles on the physical, mental and emotional well-being of a person. And people across the globe take up the yoga practice for multiple reasons– to find relief from pain, stress reduction, robust built and many more.  Physical fitness, stress relief, enhanced flexibility and overall health improvement are some of the major reasons that are motivating the people of U.S. to take up the art of yoga. Moreover, current practitioners claim that they experienced a strong sense of mental clarity and they strongly agree that yoga is much more than just a physical form of exercise.

3. Budding Yoga Studios:  A yoga alliance study found that the Americans spent a whopping amount of wealth on yoga gear, accessories and yoga classes which have doubled in comparison with the past few years. Researches show that Americans spend $5.8 Billion on yoga classes, $ 4.6 billion on yoga clothes, and spend $ 3.6 billion on yoga mats and other ancillaries. Also, U.S. tops the list with the most number of yoga studios per capita. The benefits of yoga in the realm of mind and body are inspiring people of USA to dwell in the yoga practice that is making yoga classes overcrowded and peace-seeking yogis are actually getting into fights over space for yoga mats. Apart from this, home, gyms/health clubs, community centers, parks remain the most obvious choice for several of them to take up the practice.

4. Business Side of Yoga: It would not be wrong to say that all those who practice yoga always sounds like they love it. The stretching, the breathing techniques, the yoga sequences, etc., — they feel fantastic about each session. The measurable benefits that yoga and meditation bestow the practitioners are hard to argue with and research continues to show steady growth in the number of yoga studios across the US. San Francisco, Oakland, California are some of the yoga-crazy metro areas of the country where you can find plenty of yoga studios, several deeply dedicated, inspirational yoga instructors shaping the life of US residents.

It is no surprise that the science of yoga is growing fast in the US and is shaping the lives of the Americans towards a better future. Slowly, it shall become a regular part of their lives as it seems to be leading this way.

The Best Apps to Find Cheap Flights on Your Phone