How Did Einstein Learn Physics?

by Florence Alfano
in Education
0
0
SHARES
23
VIEWS
Share on FacebookShare on Twitter
Trying to understand how Einstein mastered physics may, at first, seem as useless as trying to fly watching the birds and flapping your arms really hard. Well, how do you imitate someone whose name is synonymous with genius? Investigating his method of learning can bear some fruits. Whatever Einstein did to learn, he did something right, so there is merit in trying to figure out what that was. Reading his biography, a few of his methods of learning stood out and they are listed below. These methods, when incorporated into our study routine, can make learning concepts like Quantum physics and shearing stress much easier. 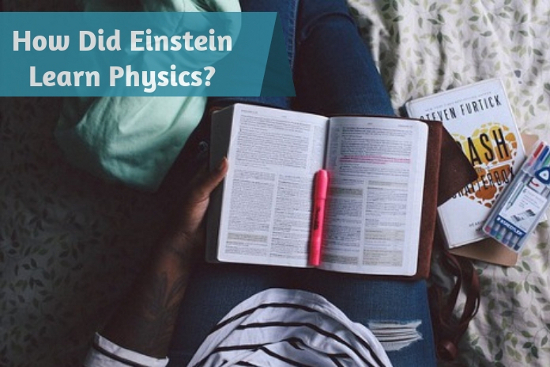 1. Learning happens when you solve hard problems, not when you attend classes
One thing that is apparent from Einstein’s early school life is his distaste for rote memorization and attending classes. Einstein often skipped classes and he skipped classes to focus on solving hard problems. Einstein mastered physics, not by regularly attending classes, but by obsessively playing with the equations and ideas on his own. Doing, not listening, was the starting point for how he learned physics.

2. Thinking needs a quiet place and deep focus
Einstein had an incredible ability to focus and was a master of deep work. The obsessive focus that Einstein practised as a young boy while working on hard problems ultimately served him well in cracking general relativity. Einstein’s commendable focus combined with his reverence for solitude, helped him to do some of his best work in physics. Even in his old age, he spent hours and hours on his boat idly pushing his rudder seemingly lost in thoughts, interrupted by bursts of scribbling equations in his notebook

3. Insights come from friendly walks
Although solitude and unwavering focus were vital components of how Einstein learned, it was often conservations with other people that presented his breakthrough. The famous example of this was his walk with his friend Michele Besso. During his efforts to comprehend the theory of special relativity, he walked with his friend trying to explain the theory. Agitated, he declared that he was going to give up working on it. Suddenly, the correct insight occurred to him and the next day he told Besso that he had completely solved the problem. From this, we can conclude that discussing ideas aloud and sharing them with friends can put together insights that were previously disconnected.

Was Einstein’s obsessive focus a result of his curiosity or intelligence? Was his achievement in physics a product of genius, rebelliousness, luck or maybe all three? There are no clear answers to these questions. What is clear, however, is Einstein’s respect for nature and the humbled attitude with which he approached investigating it.

Learning driven by the fear of exams is one among the main reason why students consistently perform poorly in academics. BYJU’S – The Learning App, has tried to address the problem by developing products that can be modified to the unique learning style of each and every student by giving them personalized lesson recommendations and adaptive assessments to address specific learning gaps. Learning concepts like bipolar junction transistor and quantum mechanics has never been easier. You can subscribe to BYJU’S YouTube channel to learn about different concepts in Mathematics and Physics. Also, have a glimpse of how BYJU’S app is changing the way students learn.

10 Advantages of Opting for a Two-Wheeler Loan

Everything You Should Know about a Personal Loan

Everything You Should Know about a Personal Loan