The question whether there’s an alcoholic member within the family in a therapy session is common. Alcoholism can easily reduce a once cheerful family into fights, ignored emotions, debts, divorce, and even loss of lives. 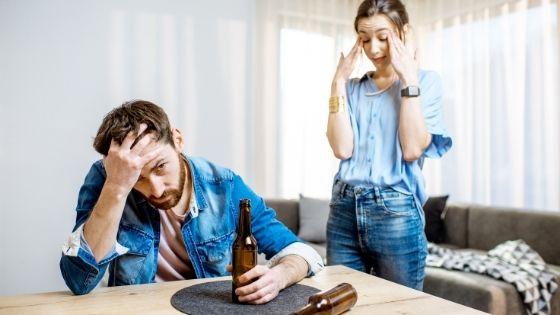 When someone has a drinking problem, it affects anyone around them. It doesn’t matter whether it’s workmates, children, spouses, friends, and parents. Here are some ways in which alcohol addiction affects families.

Alcohol alters one’s cognitive capabilities and priorities. In due course, the person suffering from alcohol addiction will start backsliding or ignoring home life responsibilities. For example, a parent’s time having fun with children is spent in bars with drinking buddies.

Problems with the Legal System

Most addicts can’t resist the craving for alcohol and may end up drinking before legal drinking hours or drinking and driving. Such habits are unsafe to the addict and stressful to the family members who will have to come through to bail them out whenever they are involved in legal problems.

If you’re tired of bailing out your loved one every week, look for free drug rehabs and enroll them there. They’ve proven treatment programs that work when applied to alcohol addiction patients.

Health problems related to excessive alcohol drinking vary from mild side effects like hangovers to serious illnesses like cardiovascular and respiratory diseases. Naturally, when a family member is ill, it invites sadness and mental breakdowns to people who are close to them.

Being an alcohol addict doesn’t necessarily mean one is unfaithful, but it can open doors for infidelity to happen. In homes where one or both spouses have an alcohol problem, there’s always a fight about credit cards, aggressive behavior, and such.

When there are many problems in a marriage, faithfulness which is the bedrock of the marriage, is compromised. Healing from alcohol addiction is possible, but infidelity in most cases only leads to divorce. This increases the number of broken families which is a negative impact on the community.

The main causes of unplanned pregnancies are sexual violence and unprotected sex, in which people with alcohol addiction have an increased risk of falling prey. It might take some time to find out that you’re pregnant, especially if the pregnancy was unintended. Drinking while pregnant can cause fetal alcohol spectrum disorders to the unborn child and harm the mother.

People start drinking for different reasons. However, those who start drinking due to a rough psychological period will end up addicted. Family members and friends may intervene in an attempt to save them, but alcohol can cause people to misunderstand the intention of others. What is an honest act of concern may seem to an addict as judgment and confrontation.

Some alcoholics may respond with violence, detachment, or the addiction may get worse in such circumstances. In as much as alcoholism is a complex disease, it should never an excuse for violence or negative conduct.

Alcohol addiction is a complicated mental illness. People should always seek professional help instead of trying to overcome it alone. Search for free drug rehabs near me and choose a facility that impresses you.