Every industry has its own basic terms, and it is a hallmark of every great trader to be able to hold conversations using these terms. Outlined below are some common terms that you cannot but come across in your forex trading journey. 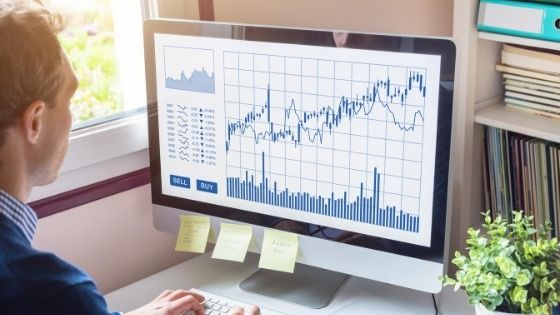 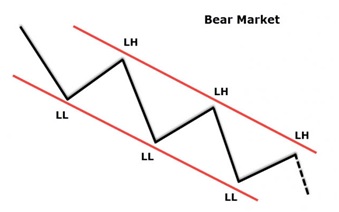 A market in which prices are generally on the decline. This is usually common in times of extraordinary economic turmoil and uncertainty, like during the early times of the COVID-19 pandemic. But it must be noted that in practice, there is no actually any bear market in the Forex market; and the reason is that since currencies are in pairs with one currency pitted against the other, when one currency is one the decline, the other currency in the pair is invariably on the rise. So in the case of EUR/USD, if the Eurozone experiences extraordinary economic uncertainty and the EURO enters a bearish zone, the other currency, the USD, starts to gain momentum.

Bid Price – The opposite of “Ask Price.” The Bid Price is the rate at which a trader is willing to buy a currency. When thinking of the relationship between the Bid Price and Ask Price, we can think of a negotiating scene, where both parties put forward prices at which they are willing to exchange the materials in question. However, we must note that in the forex market, this “negotiation” never occurs physically and the seller and buyer do not actually have to meet. The Bid Price and Ask Price are set by sophisticated computer systems.

Bid/Ask Spread – The difference between the bid and offer price; it is what the broker charges for facilitating the trade between buyer and seller.

The Bid/Ask spread is the most widely used measure of market liquidity. That is, when the spread is tight, we can safely conclude that the market is very liquid and active; conversely, if the spread is wide, it can be said that the market is somewhat illiquid, and it is advised that as traders we stay away from this type of markets. For USD, GBP and EUR pairs, such scenarios are usually found during the Asian Session which spans from 11PM GMT (7PM EST) to 7AM GMT (3AM EST).

A financial institution that acts as an intermediary, facilitating trades in the currency markets by bringing together buyers and sellers for a fee or commission, usually called spread.

This is different from a ‘dealer’ that commits capital and takes one side of a position, hoping to earn a spread (profit) by closing out the position in a subsequent trade with another party. 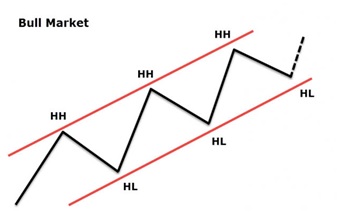 A market in which there are constantly rising prices. As already mentioned in ‘Bear Market’ above, there are no perfect bull markets that occur at the same time in the forex markets, as against what is obtainable in the stock or commodities markets. In the stock market for instance, almost all the stocks listed in an index can be on a rally at the same time; similarly for commodities. However, in the currency markets where currencies are listed in pairs and pitted against each other, such is not obtainable. When one currency is in a bull market, the other that is pitted against it, will be in a bearish condition.

Buying/Selling – In the forex market currencies are always priced in pairs; therefore, trading effectively involves the simultaneous buying of one currency and the selling of another. The main aim of a currency trader is to buy the currency that increases in value against the one you sold. If you have bought a currency and the price appreciates in value, then you must sell the currency back so as to bag the profit.

As you must have seen, forex prices are displayed in charts. There are however, three types of charts – Line chart, Bar chart and the Candlestick chart. The Candlestick chart, due to its utility and comprehensiveness, is the most widely used.

The Candlestick chart indicates the trading range for a particular time frame (ranging from 1M to 1Y) as well as the opening and closing price. If the price at which each candle opens (i.e. the “OPEN”) is higher than the price at which it closes (i.e. the “CLOSE”), the rectangle between the open and close prices is typically coloured black or red, depending on preference. If the close price is higher than the open price, that area of the chart is coloured white or green, depending on preference. The Candlestick chart can be customized in several colours.

A governmental institution that manages a country’s monetary policy and serves as regulator of all matters dealing with that country’s currency. Except in a few circumstances like the US Federal Reserve, it is the central bank that issues the currency in the first place. Notable central banks globally include the Federal Reserve Bank of the US, the European Central Bank (ECB) for the European Union; the Bank of England, Bank of Japan, amongst others.

Do you want to start participating in the markets, and see how these terms are applied, while earning and growing your account? Then the best way to do this is through winning forex trading signals. And one of the best forex signals provider you can find is 1000PipBuilder or you can find free forex trading signals on the internet. Much reviewed and highly rated online, 1000PipBuilder is your channel to consistent profitable trading.

Reasons to Get Accounting Assignment Help Without Wasting Time