by Florence Alfano
in Technology
1
0
SHARES
49
VIEWS
Share on FacebookShare on Twitter
GPS navigation apps are used worldwide by almost every person. They show us all vital information including traffic condition, alternate routes, ETAs etc and most of them are free.  GPS navigation apps fall into two categories for iPhones: on-board and map on the fly. The former one stores the whole map on the iPhone while the latter one downloads the map as we drive.

Despite the fact that all iPhones, iPads etc come loaded with Apple’s own Maps still people are little reluctant to use it because there are flaws in it like business markers are slightly wrong, it gets confused at times with postcodes etc. 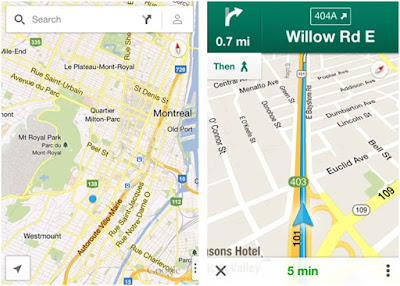 We all are well versed with the Google Maps and its navigation. It has all these awesome features of showing the traffic en-route, searching for exact locations, driving, biking, bus and train information etc. Along with this, there’s also a voice guide to give us turn by turn instructions while driving.

You can also switch between routes and choose alternate routes. The maps change from day to night mode automatically when the app senses darkness. There’s no argument that the iPhone app development company has admired the Google Maps on iPhones and this has indeed proved to be the best GPS system.

The traffic of Google Maps is powered by Waze and it calculates a possible way around traffic. Apart from all this, it also points fuels stations, hospitals, accidents etc on your route. It also offers the feature of adding stops on your way. Most importantly Google Maps is the most trusted and experienced app used worldwide. 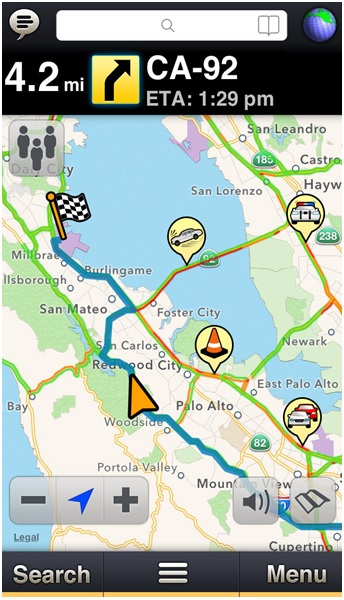 MotionX GPS is a full featured and powerful navigation app that hit the iPhone market quite early. It shows your current position on the live MotionX road map. It can record and save up to 101 tracks for future use. It also records your speed, distance covered and time.

Unlike other apps , it offers nine maps to choose from. To share your personal experience, you can also geo tag photos and even share your tracks, waypoints etc on Facebook and Twitter. It has integration with Wikipedia which can prove to be your personal tour guide.

You can download and save offline maps for a faster use. Besides this, you can also save up to 500 personal points for your favorite places like home, office, favorite restaurant etc. 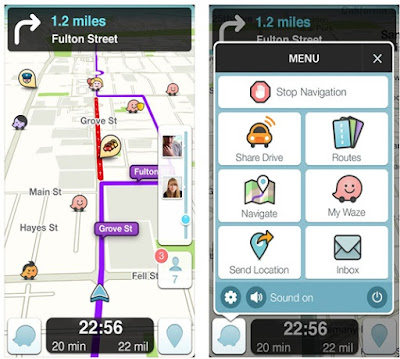 Waze is an amazing navigation app and was acquired by Google. This app features on crowd sourcing which mean that everyone using Waze can input their information about the roads, traffic, best routes etc. Based on this the app provides the best route to reach your destination rather than satellite provided information.

If you are meeting with people at a point, you can also add them to the app and see their locations. It offers FourSquare, Twitter and Facebook integrations also. It is a map on the fly based navigation app. 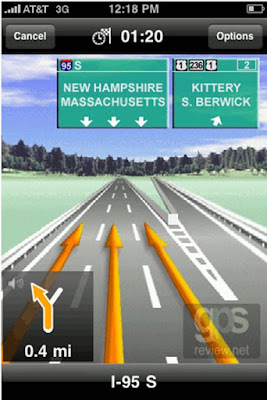 Navigon is paid app which costs $49.99 in the USA. It has 2D and 3D map feature along with day and night mode. It also has intelligent address searching feature, routing etc along with actual road sign graphics; it is not a free app rather a professional app.

You can access the maps anytime, even without a data connection or slow network or even on roaming. It also offers the feature of guiding the user to a free parking space and you don’t have to waste time in searching for a free parking slot.

In Germany, it also helps in finding the cheapest gas station by listing the fuel prices of the stations. It has a multi language support with spoken street names. 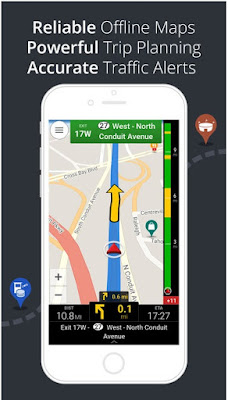 It is an offline navigation app for places where there’s no steady network. It allows you to search for alternate routes and to switch between routes. The ETA updates automatically depending upon the traffic conditions and it also shows alternate routes for congested routes.

A traffic status bar keeps on updating the traffic conditions. In case if some accident has occurred on the chosen route, it reports the same along with pointing to an alternate route. It also has a walking mode to help you with an unfamiliar area that you have never donned before.