Looking to bake some delicious cinnamon scrolls? Follow the few tips to make sure your scrolls turn out as tasty as they can be! 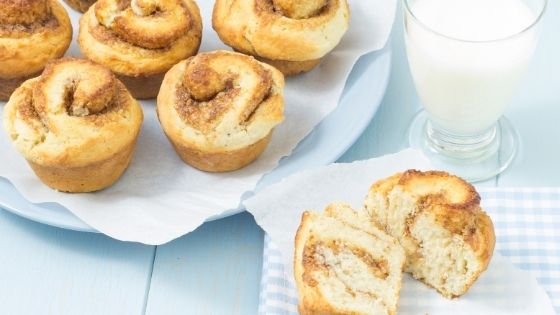 For an extra touch of sweetness and a softer texture, it is always best to use brown sugar over white sugar when making cinnamon scrolls. Not only does brown sugar help improve the softness of baked goods (due to its ability to retain moisture), it also slightly darkens your scrolls, giving it a warm and crispy glow. Incredibly complimentary with cinnamon, brown sugar is a must for cinnamon scroll baking!

Experiment with the filling

It’s a given that cinnamon scrolls will be filled with cinnamon, but there are certainly times when you can incorporate other flavours into the spicy pastry as well. Rather than sticking with the boring old cinnamon filling every time, try combining it with other ingredients such as dried fruits and nuts.

By experimenting with these ingredients and finding one that tastes delicious complimentary to the signature cinnamon flavour, your cinnamon scrolls will be able to stand out from the crowd! Have fun testing your creative baking skills to the test and build upon the much-loved cinnamon scroll recipe with an innovative flavour!

Always wait for your dough to rise

One of the key ways to make sure your cinnamon scroll is soft and fluffy is to wait for your dough to rise before baking. Expert bakers recommend you to wait for at least 60 minutes (ideally 90 minus) for your dough to rise before baking it in an oven. This way, you guarantee that your scrolls are of optimal size and come out of the oven with a light and smooth texture.

When waiting for your dough to rise, it is also important to make sure that your dough is sealed in an airtight container or tray. The best way to do this is to tightly cover your dough with plastic wrap or aluminium foil.

Cinnamon is a uniquely spicy flavour which toes the line between sweet and savoury. In order to compliment your sweet bread and prevent your scroll from becoming a savoury option, it is always a good idea to pair it with sweet and creamy toppings. A staple option that can never go wrong is whipped cream. If you’re looking to go light, vanilla or sugar dusting may be a good choice as well. However, if you do want your cinnamon scroll to be a more savoury option, consider using cream cheese as a topping instead!

Follow the above tips and you’re sure to make delicious cinnamon scrolls! However, if you feel that baking is too complicated, or you simply don’t have the time, consider using Suprima Bakeries‘ frozen dough instead!

How to Extend Life of Your Home with Masonry Services?

Stretches You Can Do To Help Relieve Back Pain

Stretches You Can Do To Help Relieve Back Pain